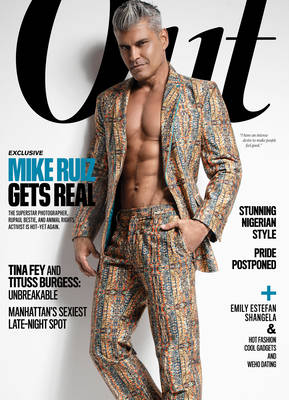 At the age of 28 Ruiz began in the field of photography. "I found a camera under my Christmas tree and within minutes, I was obsessed. I began shooting everything in sight. I taught myself the intricate mechanics of the camera but it was a couple of years before I realized that I could actually make a living with my work‚" Ruiz was quoted as saying.[5] Presently based in New Jersey, Ruiz is known for beauty, celebrity and fashion photography.[4]

Mike has also appeared frequently on America’s and Canada’s Next Top Model, Rupaul’s Dragrace, along with dozens of other television appearances as an expert in his field.

Mike is most proud of his community service having supported such organizations as The Ali Forney Center, GMHC, The Trevor Project, Housing Works, It Gets Better Campaign, Live Out Loud, Project Angel Food, and GLAAD. He is also on the honorary board of the "Let There Be Hope" research foundation.

In April of 2020, Mike graced the cover of OUT Magazine for his contributions to the LGBTQ community and the arts.